The 1950s were a time of expansion for Standard Electric. The late 1940s construction boom spurred demand for electrical apparatus and supply products as well as appliances. Building on this growth, the company expanded its sales force throughout Wisconsin. The companies reach extended from Milwaukee south to Kenosha, west to Madison, and north into the Fox River Valley and Rhinelander. Mobile branch trucks were restocked weekly and used to service these new territories.

In 1950, Adolph Stern, father to current president Larry Stern and son to former president and founder David Stern joined the company as a warehouse associate. Later in his long career at the company, he would serve as president from 1987-1993.

With this expansion came growing pains, as the company once again found they were running out of space. A two-story addition was added to the building on N. Fifth Street in Milwaukee to allow them more space to grow and accommodate rising inventory levels to service customers.

Advanced technical products like switches and panel boards were added to the product offering as the apparatus and supply business grew. They also added non-technical items to the product mix, like dinnerware, cookware, silverware, and utensils. The major appliance group also expanded to include televisions, air conditioners and gardening equipment such as lawn mowers. Standard Electric carried big-name lines that included Sunbeam, KitchenAid, and Westinghouse. 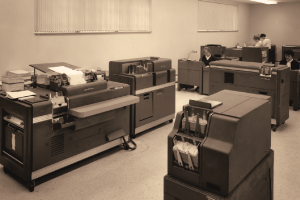 In 1959, the company installed an IBM System 1401 to assist with order entry. This machine was one of the first systems of its kind in the country and considered cutting-edge technology for the time. Standard Electric has a long history of looking for the latest technologies to help service customers and run more efficiently. Standard Electric is always looking for ways to improve business operations and customer service. It is that commitment to fanatical customer service that has kept them in business for the last 100 years.