Creation and Evolution of Electricity Distribution 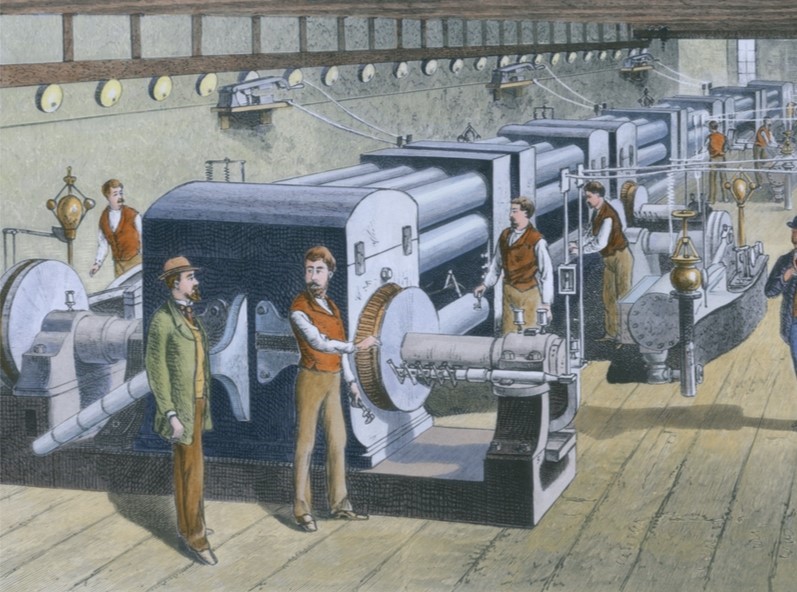 The history of how society harnessed the power of electricity goes well beyond kites, keys and even lightbulbs. This piece written by Rob Santini for his class at Penn State University covers some great information on the humble beginnings of electrical distribution.

The earliest electric distribution systems were located in the area surrounding the Pearl Street Power Station in Manhattan, and in Menlo Park, NJ. Both were built by Thomas Edison in 1882. These systems used direct current (DC) and were very inefficient, requiring electric generating stations to be close to the users, generally within a mile. These types of generation-transmission systems were called distributed generation systems.

In the 1890s, further development and refinements of distribution systems were made. The most significant of these improvements was the design of alternating-current (AC) , high-voltage distribution transmission systems. This was significant because these new AC lines permitted electric power to be transmitted over much longer distances than the inefficient DC system did.

In 1896, George Westinghouse built an 11,000 volt AC line to connect Niagara Falls to Buffalo, NY – a distance of 20 miles. From that point on, the generation of electricity and the voltage capacity of transmission lines grew rapidly, while the distance from the point of production to the consumer grew wider. This resulted in a move away from the localized production of electricity to much larger, regionalized producers that could generate more electricity at one location and move it longer distances on the growing electrical grid.

The transmission system was built, over the past 100 years, by vertically integrated utilities that produced electricity at large generation stations located close to fuel supplies or needed infrastructure, and then relied on transmission facilities to transport their electricity to customers. Interconnections among neighboring utility systems were constructed to exchange power to increase reliability and share excess generation during certain times of the year. From its early beginnings in the late 1800s, the electric transmission and distribution system in the United States has evolved into a massive grid, bringing electricity to nearly every corner of the country. Today, this grid is a complex network of independently owned transmission lines that now encompasses a network of over 150,000 miles of high-voltage transmission lines linking generating facilities to load centers through interconnected transmission systems spanning states, territories, regions, and the borders of Mexico and Canada1.